Melanie Choukas-Bradley has been a long-time freelance contributor to The Washington Post and many other publications.  Below are some of the more prominent selections from her contributions.

(Mar. 24, 2017) “Worried about the cherry blossoms? You may have ‘phenology anxiety.'”
Melanie’s op-ed about the worry that natural occurrences are seriously out of whack.

(2010) “Ironing”
Melanie muses on one of the more common household tasks.

(Sep. 1, 2008) “A Creek Runs Through It”
Rock Creek meanders through Montgomery County for more than 20 miles and is marked by nature’s beauty.

(Jul. 17, 2007) “Let’s Keep the Country in Montgomery”
An essay on behalf of the country’s rural areas, and Montgomery County’s in particular.

(Jul. 2, 2006) “Lessons Along Rock Creek”
Melanie assesses Rock Creek Park after a storm, including the area with “her” meditation rock.

(2003) “An Old Dog and Some Blackberries”
First published in The Washington Post.

(May 30, 2002) “Every Tree Counts: A D.C. Census of What Grows Where”
Melanie provides a peek inside a little-known event.

(2002) “The Proverbial Word to the Wise: Where There’s a Will There’s a Cliché
…and the Voice of the Ages”
First published in The Washington Post.

(Jan. 14, 1999) “Jackson’s Magnolias Lose Their Currency”
A look back on the former President’s legacy at the White House and on the twenty-dollar bill. 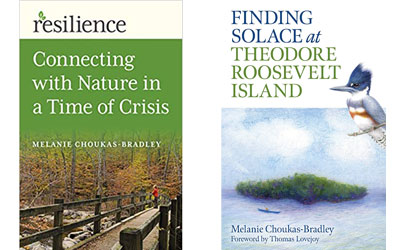